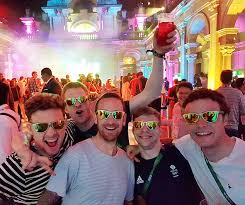 The 2016 Olympics in Rio was an advertising dream for Oakley Sunglasses, with many of the biggest sporting stars across the globe modelling the successful brand. This isn’t a revelation for the eyewear giant. For years, it has remained the favourite brand of choice for sporting greats.

Let’s take a look at the athletes who often rely of the performance of their shades.

Born in Santa Clara in California, Kerri Walsh is one of the world’s most successful beach volleyball players. Paired with Misty May-Treanor, they are one of the highest achieving teams in the sport, dominating since 2002. They consistently took home the gold medals in 3 consecutive Olympic Games; Athens 2004, Beijing 2008 and London 2012, proving that they really are the ones to beat. Kerri Walsh consistently wears the Oakley brand in major championships, ensuring that she keeps the sand out of the way and keeps both eyes on the volleyball.

Although he lost out on the gold medal at this year’s Olympic Games to Justin Rose, there is no denying Stenson’s achievements in the sport. Born in Gothenburg in 1976 he became the first Swedish major champion after winning the 2016 Open Championship.

Born in 1985 in the Isle of Man, Cavendish is one of Great Britain’s best athletes. Notable wins for the cyclist and 2011 BBC Sports Personality of the Year consist of; the 2009 Milan-San Remo, the 2010 Vuelta a Espana and the 2011 Tour de France. It wasn’t until 2016 that he won his first Olympic medal, taking home silver at the games in Rio.

Zachary Harris Johnson was born in the city of Iowa in 1976. The professional golfer has had 12 victories on the PGA Tour including two major wins. In 2007 he won the Masters Tournament, beating Retief Goosen, Rory Sabbatini and Tiger Woods by two strokes. He went on to win the Open Championship in 2015. Golf might seem a serene sport to warrant the use of specific glasses but Oakley’s even protect against the impact of wind- which can be very off putting in a game of golf.

Also known as Mike Stanton, Giancarlo Cruz was born in LA in 1989. He is a baseball right fielder for the Miami Marlins of Major League Baseball, making his debut appearance in 2010. In 2014 Marlins signed him to one of the most lucrative contracts in the sports history, which is worth $325 million over 13 years.

Lin Dan is one of the most successful badminton players in the world and considered one of the greatest players of all time. He was the first men’s singles player to retain Olympic gold winning in the 2008 Beijing Olympics and then again in the 2012 London Olympics. He has consistently been placed in all major badminton tournaments since the start of his career and is the only player to have won all 9 major titles in the sport.

Born in 1989 in Cape Town, Richard Murray is one of South Africa’s most promising triathletes and was their biggest medal hope in 2016’s Olympic Games. This year he won his first senior World Championships title despite suffering a serious car crash just two months beforehand.

Born in 1992 in Ottawa, Sean Pettit was sponsored by Oakley when he was just 11 years old. Today, the Canadian born skier is one of the most popular in the sport. He is known for his skill as a big mountain skier.

Born in 1986 Nino Schurter is a Swiss cross-country cyclist who is part of the Scott-Odlo-MTB racing team. With 5 World Championship titles under his belt Schurter has also won a bronze medal in the 2008 Beijing Olympics and a Silver at the London Olympics in 2012.

Twin brothers, Bob and Mike were born in 1978 just two minutes apart. The pair are the most successful professional doubles players of all time. They have taken home various medals over their professional career, dominating the sport.

There’s no doubt that Oakley is, and will continue to be a favourite of the sporting greats.